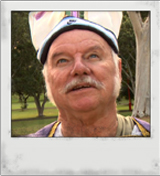 Russell Newman became a stalwart of the Queensland Theatre Company playing classic and contemporary roles in the 70s.

But it’s from decades of fine acting on television that Russell is most familiar to audiences, including the acclaimed ABC series 1915, Edens Lost, Palace of Dreams, Brides of Christ and Joh’s Jury, as well as a regular role in Fireflies and popping up on The Love Boat and in Mission Impossible and Underbelly II among many other credits.

Russell played the role of Wiliam Frawley in Lucy, the story of Lucille Ball, for Columbia Pictures. Prior to joining the cast of Codgers, he’d been treading the boards with Magda Szubanski and Garry McDonald as Arvide Abernathy in Guys and Dolls.

Most recently, he appeared in the acclaimed ABC mini-series Paper Giants. Russell has come to understand “there’s many a good tune played on an old fiddle”!