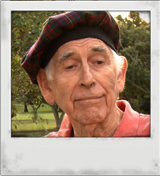 Ron Haddrick made his first appearance on the stage at the Tivoli Theatre Adelaide in 1946 and in 1953 joined the Stratford Memorial Theatre (now the Royal Shakespeare Company) with whom he toured Shakespeare to Russia in 1958.

Following his return to Sydney he worked with the Trust Players, notably in The One Day of the Year and, from 1963, played in over forty productions for the Old Tote Theatre Company.

In 1987 Ron received two Sydney Critics Circle Awards for his performances in Long Day’s Journey Into Night and I'm Not Rappaport. His most recent stage appearance was for Queensland Theatre Company in the new Australian play Water Falling Down. Ron’s not sure when he first became a codger – maybe he’s always been one as he is certainly very comfortable with this role in life!