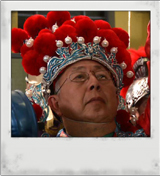 Jon Lam was born in Australia to Chinese parents and spent most of his formative years in New Guinea. His interest in performing dates from discovering two left feet at Miss Marjorie Robinson’s Tap Dancing School in Maroubra in 1949.

On returning to Australia, he appeared in the East Coast Theatre Company's Empress of China for B Sharp and in the independent production In Sheila's Case. Jon has also appeared in the features Singapore Sling, Matrix Reloaded and Matrix Revolution.

Jon enjoys $2.50 train fares to Woy Woy for fish and chips with other like-minded codgers – and he identifies strongly with the role of STANLEY.