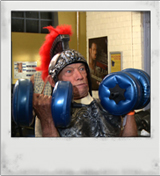 Edwin Hodgeman has been a constant presence over the last four decades with the State Theatre Company of South Australia, as well as with Melbourne, Sydney and Queensland Theatre Companies, Nimrod and Bell Shakespeare.

Edwin has recently completed a season of Moliere’s The Hypochondriac with Brink Productions. Edwin has appeared in many films including Playing Beattie Bow, The Fourth Wish, Mad Max III and Shine and on television in such classics as Robbery Under Arms, True Believers and Rainshadow.

What else can one say upon joining the cast of CODGERS other than, “I came. I saw. I wrinkled.”